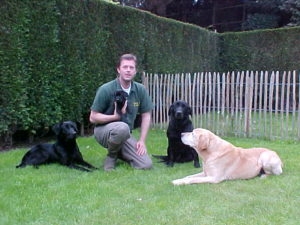 Jo lives in the North of Belgium, he started in 1993 and bought his first Labrador Roydon Yochiver with the intention to do obedience training. In 1998 came the first working breed Labrador, From Gundogs’ Heaven Billy in.
From Gundogs’ Heaven Billy became the title of Belgian & International Field Trial Champion. He qualified Billy three times for the Belgian Retriever Championship. Since the last 10 years, Jo has qualified two of his dogs on 5 occasions for the Belgian Retriever Championship. As an amateur, he made two field trial champions in the last decade,  B. & Int. FTCH From Gundogs’ Heaven Billy and B. FTCH Starcreek Devon.
He has participated on field trials and workingtests in Belgium, the Netherlands, France, Germany and United Kingdom.
He was one of the founders, member of the board and vice-president of the Belgian Labrador Retriever Club in 2001. He was also responsible for the working committee for many years. Since 2006, he is FCI Field Trial judge for Retrievers. His experience as a FCI Field Trial judge for Retrievers has taken him to the Netherlands, Germany, France, Switzerland, Italy and Spain judging Field Trials and Gundog Working Tests.

Training seminars have also featured in different countries. Jo bases his training style on the English techniques. He likes to see gundogs who hunt with style and have natural gamefinding abilities.
During the hunting season, he attends multiple shooting grounds with his dogs and he believe that these are the most beautiful moments in a year.

He wish all the best for the competitors on the Flatcoated Retriever Trophy.